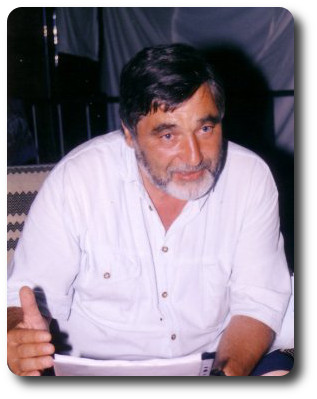 Vladimir Nikolov Dermendjiev was born on november 6, 1943 in the town Gotse Delchev, Bulgaria. He had begun to study astronomy in Sofia University in 1963 and acquired his Master degree in 1968. In 1976 Vladimir Dermendjiev being the first post-graduate student on solar physics in Bulgaria defended a thesis about prominence activity. He received a position as research fellow in the Department of Astronomy (now Institute of Astronomy), Bulgarian Academy of Sciences in 1977.
Since 1995 Vladimir Dermendjiev became Doctor in Science and Professor. He was Director of the Institute of Astronomy in the period 1993 – 1995 and its scientific secretary in the period 1996 – 2000.

Under his supervision a firm group of researchers in solar physics and magnetohydrodynamics was formed and in 1985 the Solar division was established. He laid the foundations of systematical and detailed researches of on solar physics in Bulgaria. In 1992-1993 by his guidance a Solar station in the region of Rozhen National Astronomical Observatory in the Rhodopes Mountains was build. Moreover, by his initiative a network for white-light monitoring of the Sun in several people observatories was build.

He worked on the problems of quiescent and eruptive prominences, green corona, photospheric bright points, solar flares and solar cycle. One of the main tendencies of Dermenjiev’’s scientific researches was the magnetohydrodynamic modelling of different activity events in the solar atmosphere. His researches in this direction laid the beginnings of the solar magnetohydrodynamic and plasma physics in Bulgaria. Dermendjiev’s theoretical work is related to the constructing of original hydrodynamic and MHD models for research purposes by means of computer simulations of those processes that contribute to the appearance of active formations in the solar atmosphere.

He is one of the co-authors of a new method for determination of indirect index of solar activity under the title “Microzonality of Luminescence of Cave Flowstones”. This new index allows to obtain the maximum duration of the solar activity time series of about 35 000 years and its resolution allows to obtain the data about the properties of the separate 11-year cycles.
Within the framework of the archeoastronomy Vladimir Dermendjiev has several investigations about the emergence of astronomy in a rudamentary form. His investigations in this direction are related to the information on astronomical knowledge in prehistorical societies lived in Western Rhodopes.
Professor Dermendjiev was one of the main figures in the preparation, organizing and implementation of the Bulgarian programme for observation of total solar eclipse on August 11-th, 1999. He was a secretary of the National Committee for total solar eclipse.

Dermendjiev is an author of several monographies and more than 150 papers, published in firm international scientific journals. He was well known all over the world and had collaborations with colleagues from France, Poland, Russia, Czech Republic, Slovakia, Romania, Turkey and England.
Till his dying day Dermandjiev remained active member in many national and international organizations. Hi was a member of JOSO board of many years.

On January 5, 2001 Prof. Vladimir Dermendjiev suddenly died by heart attack at his desk in the Institute of astronomy. The Bulgarian astronomy loosed an excellent scientist. Nevertheless, he was in poor health, he worked intensively. Vlado (his colleagues and friends called him so) was always ready to help colleagues, PhD and diploma students with a wise advice on science, or on things of the life. Those who have met Vladimir Dermendjiev will remember his as eminent scientist, teacher and organizer.